March Online Book Club: What is it? 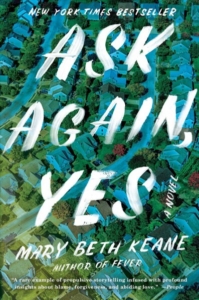 Francis Gleeson and Brian Stanhope are two NYPD rookies assigned to the same Bronx precinct in 1973. They aren’t close friends on the job but end up living next door to each other outside the city. What goes on behind closed doors in both houses—the loneliness of Francis’s wife, Lena, and the instability of Brian’s wife, Anne, sets the stage for the stunning events to come.

Ask Again, Yes by award-winning author Mary Beth Keane, is a beautifully moving exploration of the friendship and love that blossoms between Francis’s youngest daughter, Kate, and Brian’s son, Peter, who are born six months apart. In the spring of Kate and Peter’s eighth-grade year a violent event divides the neighbors, the Stanhopes are forced to move away, and the children are forbidden to have any further contact.

But Kate and Peter find a way back to each other, and their relationship is tested by the echoes from their past. Ask Again, Yes reveals how the events of childhood look different when reexamined from the distance of adulthood—villains lose their menace and those who appeared innocent seem less so. Kate and Peter’s love story is tender, generous, and graceful. 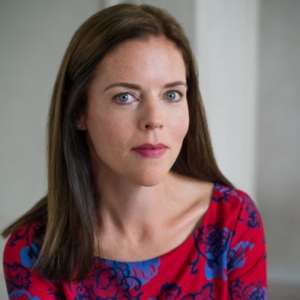 From her website, “Mary Beth Keane attended Barnard College and the University of Virginia, where she received an MFA. She won aw a John S. Guggenheim fellowship for fiction writing and has received citations from the National Book Foundation, PEN America, and the Hemingway Society. She is the author of The Walking People, Fever, and most recently, Ask Again, Yes, which spent eight weeks on the New York Times Best Seller List. To date, translation rights to Ask Again, Yes have sold in eighteen languages, with most translated editions forthcoming in 2020-21. Both Fever and Ask Again, Yes are in development to become limited television series.” 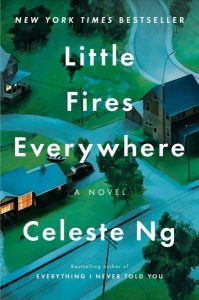 1. This novel has been described as a “Domestic” novel. Do you feel that’s the right genre for this novel? Why or why not?

2. Ask Again, Yes is told from the perspective of many different characters (Kate, Peter, Francis etc.). How do you think this adds to the development of the story?

3. The title Ask Again, Yes references the discussion Kate and Peter have at the end of the book. Do you feel that it applies to any other characters?

4. How are mental health and addiction issues portrayed in the novel? Do the characters’ experiences differ due to the era they grow up in?

5. Who do you think is the most sympathetic character in the book? Who is the least likable?

6. When Francis discovers Anne at Peter and Kate’s house, did his calmness surprise you? Or is this in line with his character?

7. The theme of history repeating itself is central to this novel. Which characters most fall into these patterns? Are there characters that don’t?

8. Kate, Lena, and Anne are very different women. How is the role of the traditional wife and mother portrayed in this novel?

9. The shooting changes the lives of almost everyone in the novel. How different do you think the following relationships would have been had it never happened? i) Kate and Peter ii) Lena and Francis iii) Anne and Brian.

10. What do you think the future holds for Kate and Peter?