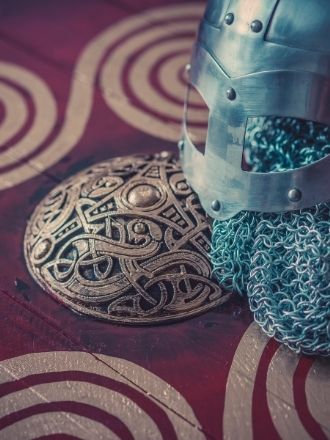 Loki, played by Tom Hiddleston, is a constantly scheming, often charming, always full of guile delight of a character. He’s full of moral ambiguity and just when you’ve written him off as a villain, he does something brave or kind or good. Only to be balanced later by something epically wrong.

If you’re a Loki fan, try one of these readalike suggestions to get your fill of trickster goodness.

The Gospel of Loki by Joanne Harris is a brilliant first-person narrative of the rise and fall of the Norse gods. It’s retold from the point of view of the world’s ultimate trickster, Loki. It tells the story of Loki’s recruitment from the underworld of Chaos. And his many exploits on behalf of his one-eyed master, Odin. And through to his eventual betrayal of the gods and the fall of Asgard itself.

The Testament of Loki is the sequel.

The end of the world, also known as Ragnarok to the Norse gods, has occurred. And Loki has been trapped in a seemingly endless purgatory, in torture, until he finds a way to escape. It seems that he still exists in the minds of humanity and uses that as a way to our time.

Back in the ninth world (Earth), he finds himself sharing the mind of a teenage girl named Jumps. Jump’s a bit of a mess. She’s also not happy about Loki sneaking his way into her mind, since she was originally calling on Thor. Worse, her friends have also been co-opted by the gods. Odin, Jump’s one-eyed best friend in a wheelchair, and Freya, the pretty one. Thor escapes the netherworld as well and shares the mind of a dog, and he finds that it suits him.

Odin has a plan to bring back the Norse gods’ ascendancy. But Loki has his own ideas. And nothing goes according to plan.

Mackenzi Lee’s Loki: Where Mischief Lies is an adventure told through the patchwork past of Marvel’s most misunderstood mischief-maker of all time. Trickster. God of Asgard. Brother.

Loki and Amora cause the destruction of one of Asgard’s most prized possessions. Then Amora is banished to Earth, where her powers will slowly and excruciatingly fade to nothing. She was the only person who ever looked at his magic as a gift instead of a threat; without her, he slips further into anguish and the shadow of his universally adored brother, Thor. Asgardian magic is detected in relation to a string of murders on Earth. So Odin sends Loki to investigate. His journey in nineteenth-century London leads to more than just a murder suspect. It puts Loki on a path to discover the source of his power. And who he’s meant to be.

Norse Mythology presents a retelling of classic Norse tales. Enjoy stories about the major Norse pantheon that traces the genesis of the legendary nine worlds. Discover the exploits of the characters and natures of iconic figures Odin, Thor, and Loki.

Get more delightful trickster god reading with these Loki readalikes.

Or use our online resource, NoveList Plus. It provides information on over 150,000 fiction and non-fiction titles. NoveList also offers a wide range of feature content including author readalikes, book discussion guides, reading lists and more.