Everyone has a genre they just can’t stop reading. I have several, but one of my favorites is Victorian mysteries. I love mysteries in general, but there’s just something about the period flair of petticoats and poison that I enjoy. Having finished binge-watching Miss Scarlet and the Duke, I felt the urge to revisit. If you’re also mad for murder and monocles, try out these! 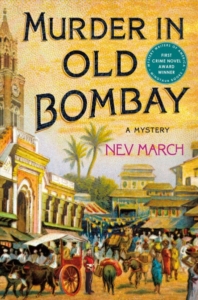 Murder in Old Bombay by Nev March. This book takes place in British India in 1892. Captain Jim Agnihotri is injured during a skirmish and recovers by reading Sherlock Holmes novels and the newspaper. One of the stories in the paper is about two women who fell out of the university’s clock tower.

The widower of one of the women insists that his wife did not commit suicide. Captain Jim approaches the bereaved family. His investigation disturbs a land already in the midst of unrest.

He must immerse himself in the unfamiliar lives of Indian women and also deal with the conventions of society that spurn him as the child of an Indian mother and an unknown British officer.

This novel addresses gender, caste, and colonialism. Despite having a fascinating mystery and action, it is definitely a slow reveal style story, so keep that in mind. 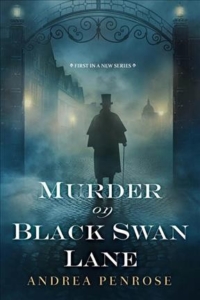 The main characters are Lord Wrexford, an unusual science loving aristocrat, and scandal sheet artist Charlotte Sloane. Charlotte uses the nom de plume of her dead husband in order to survive in a male dominated society.

In the first novel, Murder on Black Swan Lane, Wrexford is accused of murder and tracks down the scandal sheet artist that illustrated the event so that they can discover the killer. Though the unlikely duo paired up out of necessity, together they can interview the rigid upper class, the sordid underbelly of London society, and everyone in between.

The series currently has four novels that mix nicely plotted mysteries with period details. The will-they, won’t-they vibe is heavy at the start of the series. 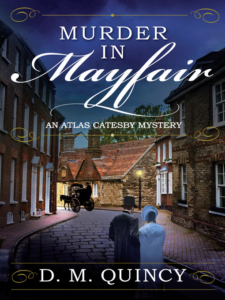 Murder in Mayfair by DM Quincy

Murder in Mayfair is the first book in DM Quincy’s series. Atlas Catesby has an excellent name and is a true English gentleman and world traveler. He happens upon a man auctioning off his young wife and rescues her. When the man is murdered, his wife is naturally blamed.

Chivalrous Catesby has to investigate. He is a man of honor whose friends keep getting embroiled with murder victims. Instead of finding new friends, he uses his intellect to attempt to solve the murders.

There are three novels in this series so far. 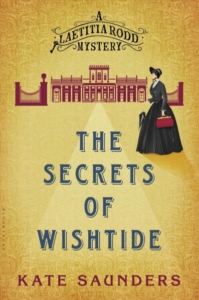 The Secrets of Wishtide by Kate Saunders

This series reminded me of Agatha Christie’s Miss Marple detective novels. The main character is the widow of an archdeacon with reduced circumstances. Mrs. Rodd acts as a highly discreet private investigator. Everyone knows she keeps her word and will not sully anyone’s reputations undeservedly. Her brother Fred is a criminal barrister who often finds the cases for her. I love their affectionate sibling dynamic. The third in this series comes out later in 2021. 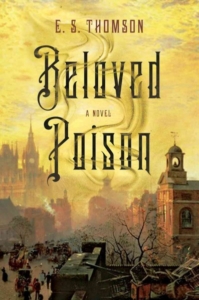 Beloved Poison is the first book in ES Thomson’s series. Jem Flockhart is a lesbian apothecary who must hide her gender from society to continue the family business. Unable to trust anyone, she finds it difficult to relate to people. Despite this, architect Will Quartermain becomes Jem’s roommate and eventually her closest friend.

In the first novel, after the murder of a doctor at St. Saviour’s Infirmary and the discovery of immensely creepy doll coffins, Jem has to discover who did it before the consequences are untenable. If murder wasn’t enough angst, Jem is also in love with the daughter of one of the infirmary’s surgeons, but she’s sure it’s unrequited.

These are dark, atmospheric books with grisly murders. They are definitely not cozy mysteries!

Podcast: 4 Diverse Books to Explore NowPodcast: Our Four Favorite Books of 2021 So Far
Scroll to top