Enjoy all of the resources you need to host a book club about graphic novels. This month’s selection is Doctor Strange Vol. : The Way of the Weird. Use these resources and host an engaging discussion. 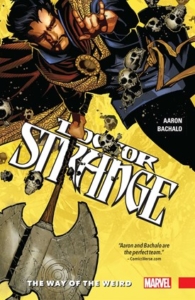 About Doctor Strange Vol. 1: The Way of the Weird

Who do you call when things are coming out of your dreams and trying to kill you? Or when your daughter is cursing in Latin and walking like a spider? Or when your dog keeps screaming at you to strangle your neighbors? Doctor Strange, of course. He’s the only person standing between us and the forces of darkness, but has he been paying his tab? Every act of magic has a cost and Jason Aaron (Thor, Original Sin) and Chris Bachalo (Uncanny X-Men) are going to put Stephen Strange through hell to even the scales.

Borrow a digital copy from Hoopla

2. Author Jason Aaron has stated that there was one main rule in this story: everything Doctor Strange does in terms of magic has a cost. What are some examples of that? How does this differ from other superheroes using their powers, particularly other members of the Avengers?

3. Doctor Strange faces an enemy called the Empirikul who is out to destroy magic. Where does their power come from? What do they want? What message do you think they are trying to spread?

4. We see a flashback on the first few pages of the story that depicts Doctor Strange as self-centered and quite arrogant. How has he changed since then? How does he evolve throughout this story?

5. What did you think about Chris Bachalo’s art style? How does it suit this story? What techniques did you find most effective? Did you think it captured the chaos and weirdness Doctor Strange sees?

6. Have you read other Doctor Strange titles? If you have, what is your favorite story and why?

7. If you’ve seen the 2016 Doctor Strange movie and/or any of the other Marvel Cinematic Universe movies that feature the character, what do you think of his on-screen translation? Will you see Doctor Strange in the Multiverse of Madness? If so, what are you looking forward to?

8. This story is appropriately titled The Way of the Weird. What was the weirdest thing, in your opinion?

9. Librarian Zelma Stanton starts off as a client of Doctor Strange and becomes a resourceful companion and apprentice. Discuss the growth she undergoes to accept her own “weirdness.” Would you like to see more of this character? Where do you think she goes from here?

10. The Sanctum Santorum is quite a locale. It’s almost a character in its own right, with secrets and powerful magic. What was your favorite thing about the site that serves as Doctor Strange’s headquarters?

Writer Jason Aaron’s early collaboration with artist Cameron Stewart on DC/Vertigo’s The Other Side was named one of the Washington Post’s Best Comics of 2007. His next project, Scalped, garnered industry-wide praise and led to a guest spot on Wolverine, beginning Aaron’s long association with Logan on various titles, as well as the rest of Marvel’s merry mutants on books including X-Men: Schism, Wolverine & the X-Men, and Amazing X-Men.

He was the ideal choice to steer the Rebel crew of Star Wars into new adventures on the series’ return to Marvel, and he ushered in a new era for the publisher with Marvel Legacy. In the wake of that one-shot, he took on Earth’s Mightiest Heroes in Avengers and welcomed another iconic property back to the House of Ideas with Conan the Barbarian.

hoopla: You obviously put a lot of thought into how magic would work in the Marvel digital: Universe, and how everything has a cost. What was your approach to using Marvel magic and how you wanted to shape it for future stories?

Jason: I didn’t want to establish a lot of rules for how magic works, because that sort of takes Aaron: the magic out of magic, you know? But it did seem important to emphasize that you can’t do the sort of job that Dr. Strange does without paying a frightening cost. From our perspective, he might wiggle his fingers and magically save the day. But it’s never
that simple. There’s a price that must be paid every time he casts a spell. And either he has to pay that himself or he has to balance how the universe itself will pay it for him.

hd: Doctor Strange is a longstanding fixture in the Marvel Universe, but any story might be a reader’s first encounter. Knowing that what was your approach to the character?

JA: I try to be aware of that with any new series I’m doing. I can’t assume that every reader shows up with a baked-in appreciation for this character and their adventures. You’ve got to show readers why they should care about this series and what makes this particular cast worth their time. You’ve got to put it all on the page.

With Dr. Strange, I wanted to show how he walks a very different beat than any other Marvel hero. And how he pays a very dark price for what he does. But how he also manages to enjoy himself along the way and appreciate the vibrantly beautiful craziness that’s all around him, some of it that only he can see.

hd: It’s clear from the very beginning that this Doctor Strange carries a heavy burden, one that most would never believe or understand. Can you talk about your choice to give him so much responsibility and the toll it takes on him?

JA: You just don’t want Dr. Strange to become a magical deus ex machina, so we need to see that it’s no easy job being the Sorcerer Supreme. Every spell shaves days or months or years off his life. Every spell lops off another piece of his soul. And that’s not even mentioning the horrors you’ll nd waiting in his refrigerator.

hd: Chris Bachalo’s artwork in this story is superb. What was your creative process like with him, and why was he such a good t for this Doctor Strange story?

JA: Chris was the only artist I ever wanted for this project. He’s so good and so idiosyncratic, able to nail that mix of action and emotion and weirdness. We had worked together before, so I always just tried to get out of his way and give him the room he needed to do his thing. Much of the time, I’d write in a looser, more old-school Marvel style for him, so he could break down the pages himself. And draw those crazy 16-panel pages that I’d never have the guts to write for any artist.

hd: How do you typically communicate your visual ideas to artists? How much brainstorming is done outside of the script?

JA: I never try to tell anybody how to draw. I just try to give them what they need, give them what I think are fun visual ideas, and let them do their thing, which could include shifting panels and pages around and bringing their own ideas to the table. It’s a collaboration, and the goal is always to do the best job of telling the story.

hd: What do you enjoy most or nd most interesting about writing Doctor Strange? Do you feel any personal connection with the character?

JA: I think just getting to see the Marvel Universe from a different perspective. And to spend time with a guy who deals with the biggest, scariest, most insane sort of business every single day, yet still is able to do so with a laugh and a smile. Dr. Strange loves his job. Even as it’s driving him mad.

hd: The Sanctum Sanctorum is a fascinating location, with powerful magic to defend itself and its secrets. How did you come up with ways it could endanger someone? Was that fun or dicult?

JA: The Sanctum should be the weirdest spot in the whole Marvel Universe, so Chris and I endeavored to make it so, by giving you glimpses of the different rooms and all the wild and wonderful secrets hidden within. Just don’t ever open the fridge. Or talk to the snakes.

hd: For fans of this series, are there any Doctor Strange or Marvel stories—current or classic—that you would suggest to readers?

JA: The original Stan Lee/Steve Ditko stories. That unique mystical strangeness that Ditko injected into the character remains such a vital part of him today. 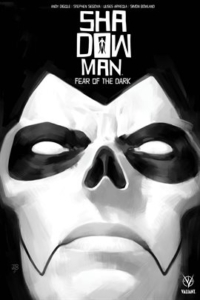 Shadowman: Year of the Dark

Shadowman: Year of the Dark

Orphaned as a child and raised on the margins of society, Jack Boniface never knew his place in the world. Until he discovered it waiting for him… in a darkness far older than the reign of men…

Unbeknownst to him, Jack was fated to become the next in a long lineage of Shadowmen — mortals bound to loas, violent voodoo spirits of immense power — that could safeguard our world against incursions from realms beyond.

For years, Jack struggled to control his loa’s murderous urges — a battle he eventually lost.

But now, after years of self-imposed exile, the man once known as Shadowman is returning home to sharpen the weapon within…and unleash a reckoning on the evils of our world that will soon send shockwaves through heaven and hell alike… 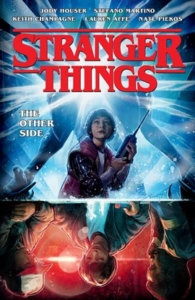 Stranger Things: The Other Side

Stranger Things: The Other Side

When Will Byers finds himself in the Upside Down, an impossible dark parody of his own world, he’s understandably frightened. But that’s nothing compared with the fear that takes hold when he realizes what’s in that world with him!

Follow Will’s struggle through the season one events of the hit Netflix show Stranger Things! Written by Jody Houser (Mother Panic, Faith) and illustrated by Stefano Martino (Doctor Who, Catwoman).

Graphic novel fans, use these resources to host your own book discussion. Or join one of our branch book discussions. Check our event calendar for times, locations, and titles being discussed.

5 Series Starters for Cozy Mysteries Set in a Library