Hispanic Heritage Month, September 15- October 15, honors the cultures and contributions of both Hispanic and Latinx people to celebrate their heritage rooted in all Latin American countries.

To celebrate that heritage, dive into one of these 6 picks by a Hispanic/Latinx author. 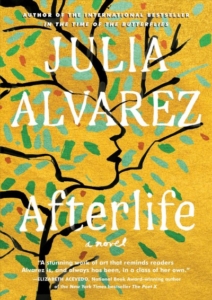 My first suggested read for Hispanic Heritage Month is Afterlife by Julia Alvarez. Antonia Vega, the immigrant writer at the center of Afterlife, has had the rug pulled out from under her. She has just retired from the college where she taught English when her beloved husband, Sam, suddenly dies.

And then more jolts: her bighearted but unstable sister disappears, and Antonia returns home one evening to find a pregnant, undocumented teenager on her doorstep. Antonia has always sought direction in the literature she loves–lines from her favorite authors play in her head like a soundtrack–but now she finds that the world demands more of her than words. 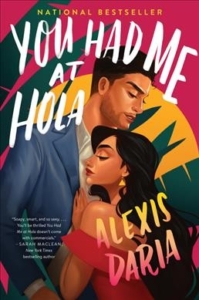 My next suggestion for Hispanic Heritage Month is the romcom You Had Me at Hola by Alexis Daria. After a messy public breakup, soap opera darling Jasmine Lin Rodriguez finds her face splashed across the tabloids. When she returns to her hometown of New York City to film the starring role in a bilingual romantic comedy for the number one streaming service in the country, Jasmine figures her new “Leading Lady Plan” should be easy enough to follow—until a casting shake-up pairs her with telenovela hunk Ashton Suárez.

After his last telenovela character was killed off, Ashton is worried his career is dead as well. Joining this new cast as a last-minute addition will give him the chance to show off his acting chops to American audiences and ping the radar of Hollywood casting agents. To make it work, he’ll need to generate smoking-hot on-screen chemistry with Jasmine. Easier said than done, especially when a disastrous first impression smothers the embers of whatever sexual heat they might have had.

With their careers on the line, Jasmine and Ashton agree to rehearse in private. But rehearsal leads to kissing and kissing leads to a behind-the-scenes romance worthy of a soap opera. While their on-screen performance improves, the media spotlight on Jasmine soon threatens to destroy her new image and expose Ashton’s most closely guarded secret. 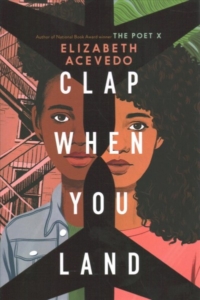 Clap When You Land by Elizabeth Acevedo

Clap When You Land by Elizabeth Acevedo

Clap When You Land by Elizabeth Acevedo,a novel in verse, is my third suggestion.

Camino Rios lives for the summers when her father visits her in the Dominican Republic. But this time, on the day when his plane is supposed to land, Camino arrives at the airport to see crowds of crying people…

In New York City, Yahaira Rios is called to the principal’s office, where her mother is waiting to tell her that her father, her hero, has died in a plane crash.

Separated by distance—and Papi’s secrets—the two girls are forced to face a new reality in which their father is dead and their lives are forever altered.

And then, when it seems like they’ve lost everything of their father, they learn of each other. 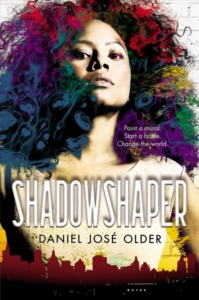 My next suggestion for Hispanic Heritage Month is Shadowshaper by Daniel Jose Older. Sierra Santiago planned an easy summer of making art and hanging with her friends. But then a corpse crashes the first party of the season. Her stroke-ridden grandfather starts apologizing over and over. And when the murals in her neighborhood begin to weep real tears . . . Well, something more sinister than the usual Brooklyn ruckus is going on. 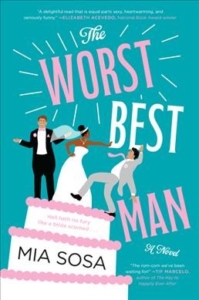 Anther romcom is my next suggestion, The Worst Best Man by Mia Sosa. A wedding planner left at the altar? Yeah, the irony isn’t lost on Carolina Santos, either. But despite that embarrassing blip from her past, Lina’s offered an opportunity that could change her life. There’s just one hitch… she has to collaborate with the best (make that worst) man from her own failed nuptials.

Marketing expert Max Hartley is determined to make his mark with a coveted hotel client looking to expand its brand. Then he learns he’ll be working with his brother’s whip-smart, stunning—absolutely off-limits—ex-fiancée. And she loathes him.

If they can nail their presentation without killing each other, they’ll both come out ahead. Except Max has been public enemy number one ever since he encouraged his brother to jilt the bride, and Lina’s ready to dish out a little payback of her own.

Soon Lina and Max discover animosity may not be the only emotion creating sparks between them. Still, this star-crossed couple can never be more than temporary playmates because Lina isn’t interested in falling in love and Max refuses to play runner-up to his brother ever again… 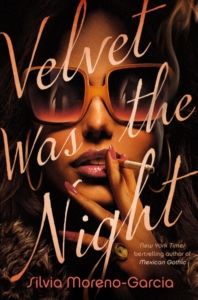 Velvet Was the Night by Silvia Moreno-Garcia

Velvet Was the Night by Silvia Garcia-Moreno

My final suggestion to read during Hispanic Heritage Month is Velvet Was the Night by Silvia Garcia-Moreno. Maite is a secretary who lives for one thing: the latest issue of Secret Romance. While student protests and political unrest consume the city, Maite escapes into stories of passion and danger.

Her next-door neighbor, Leonora, a beautiful art student, seems to live a life of intrigue and romance that Maite envies. When Leonora disappears under suspicious circumstances, Maite finds herself searching for the missing woman—and journeying deeper into Leonora’s secret life of student radicals and dissidents.

Meanwhile, someone else is also looking for Leonora at the behest of his boss, a shadowy figure who commands goon squads dedicated to squashing political activists. Elvis is an eccentric criminal who longs to escape his own life: He loathes violence and loves old movies and rock ’n’ roll. But as Elvis searches for the missing woman, he watches Maite from a distance—and comes to regard her as a kindred spirit who shares his love of music and the unspoken loneliness of his heart.

Now as Maite and Elvis come closer to discovering the truth behind Leonora’s disappearance, they can no longer escape the danger that threatens to consume their lives, with hitmen, government agents, and Russian spies all aiming to protect Leonora’s secrets—at gunpoint.

Read these Latinx authors in celebration of Hispanic Heritage Month.

If you’re looking for additional suggestions, explore our online resource, NoveList Plus.

Sign up for Recommends, our personalized book suggestions service. Twice a month, you’ll receive email with recommendations based on the genres you choose.

Listen to the Booklovers Podcast where library staff share their book picks.