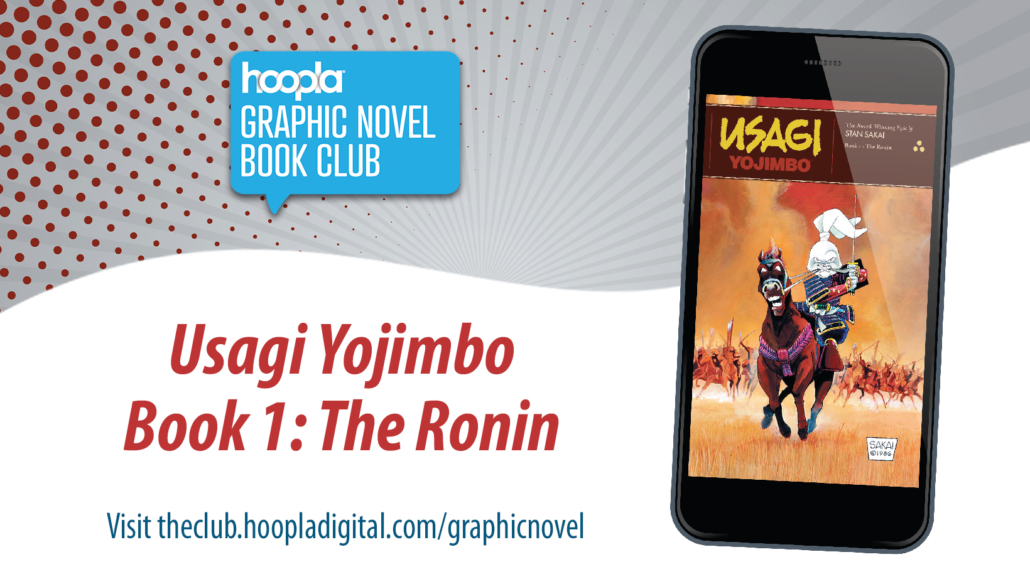 Enjoy all of the resources you need to host a book club about graphic novels. This month’s selection is Usagi Yojimbo Book 1: The Ronin. Use these resources and host an engaging discussion. 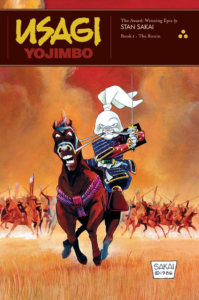 About Usagi Yojimbo Book 1: The Ronin

The setting is 17th century Japan, when the age of civil wars has barely ended and the Shogun has established power. The samurai is the ruling class throughout the land, following a warrior’s code of honor known as Bushido. Usagi Yojimbo Book 1 chronicles this time of settling unrest and political intrigue, told through the story of a wandering and masterless samurai named Miyamoto Usagi, aka Usagi Yojimbo! One of the great classics of the last 20 years, perfect for all ages.

Borrow a digital copy from Hoopla 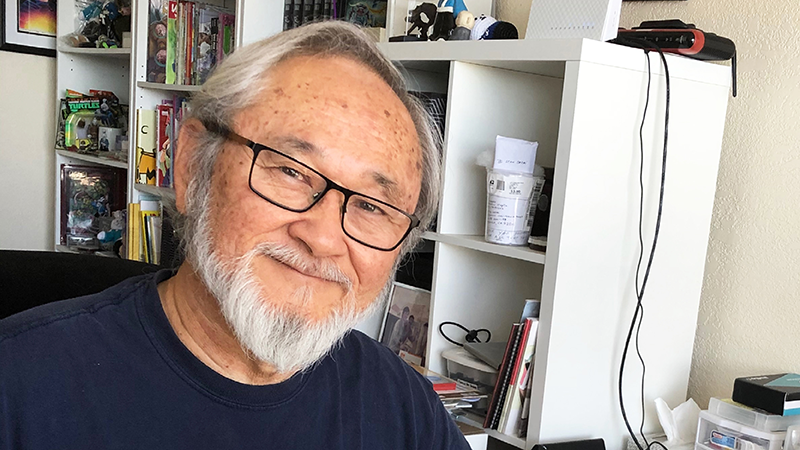 Stan Sakai is a Japanese-born American artist and comic book creator. His creation, Usagi Yojimbo, rst appeared in 1984. He is a multiple Eisner Award-winning cartoonist and the recipient of numerous national awards including an American Library Association Award and a Cultural Ambassador Award from the Japanese American National Museum. In 2020, Sakai was inducted into the Eisner Award Hall of Fame. He currently is an executive producer on the Netix original CGI animated series Samurai Rabbit: The Usagi Chronicles, which is based on Usagi Yojimbo. He lives in Pasadena.

hoopla digital: Looking back over 35 years later, what are you most proud of with this series?

Stan: I’m proud of the entire series, but a standout would be Book 12: Grasscutter. It took Sakai: about ve years to research and about 18 months to draw. The story unfolds with the creation of the Japanese archipelago by the Gods then follows the sword Grasscutter when it was discovered in the tail of an eight-headed, eight-tailed dragon, how it got its
name, and how it was lost at sea during the Battle of Dannoura during the 12th century Gempei Wars (Japan’s Civil War), then Usagi gets possession of it. The story received an Eisner Award, an American Library Association Award, a Spanish Haxtur, and other recognitions. It was even used as a textbook for Japanese History classes at the college level. Another story I am particularly proud of is The Hidden, which tells of the outlawed Christian religion in 17th century Japan.

hd: What do you enjoy most about writing Miyamoto Usagi? Do you feel any personal connection with the character? Why do you think he resonates so well with readers?

SS: I am a third-generation Japanese American and I get so much out of the research on history, culture, and folklore that goes into the stories. I also enjoy writing Usagi because I own the character and series and can do whatever I want with it. I have written romances, action/adventures, mysteries, science ction, and even pure culture-based stories such as
one that follows the traditional tea ceremony from beginning to end. I even did a story in which H.G. Wells’s Martians invade feudal Japan. There is no limit to the type of stories I can do, and no editor telling me I cannot do it.

hd: Your love of film is apparent. How do you feel that influences the way you write and draw your comics? Are there any specic films you would cite as inspiration?

SS: Like so many fans follow actors, I tend to follow directors. Kurosawa is great with movement, even when there is none—dust blowing, leaves falling, etc. I like the way certain directors introduce characters or time out a suspenseful scene. My current favorite is Taika Waititi. I love his humor and how he stages scenes.

HD: Historically speaking, the attention to detail and accuracy in this book is remarkable. How much research did you do, and what was that process like?

SS: Each story involves different levels of research. Some involve none at all while others, like Grasscutter and The Hidden, will take years before I even begin writing. It is a lot easier with the Internet, but I started when it was in its infancy so relied on a lot of books, magazines, and videotapes. I still have quite the library, though now most of it has been unused for years. Sometimes research will lead to a story. I bought a book about Bunraku, the Japanese puppet theater, and that led to a three-part story about a haunted theater with living puppets. When I do a fair amount of research I include
story notes in the back that go into depth about aspects of the story that, I think, can be expanded upon to give more insight or just because it’s interesting. My parents visited Japan a while ago and took a photo of a seaweed farm. I had never heard of seaweed farming and it intrigued me. I heard the Peabody Museum in Salem, Massachusetts, had a display on it so visited it and took notes and made sketches. I turned it into a story titled Kaiso (seaweed). Years later, my family and I visited the Fukushima area after the 2011 tsunami and did volunteer work at a seaweed farm. It sometimes comes full circle.

hd: This series depicts war and images of war, battles, violence…how do you balance the inclusion of such violence while still making the story accessible for young readers? How do you still make it funny?

SS: Usagi Yojimbo is a very character-driven series and I try to make it as true to the samurai culture (at least my interpretation of it) as I can. I don’t glorify death, but do make it less horrifying by placing skull balloons over a dead guy. That indicates the guy is really dead.

hd: The story takes place in the seventeenth century. How do you make that setting and this story speak to readers today?

SS: Japan has such an interesting history and culture and so many Westerners are intrigued and interested in it. The samurai culture, especially, is such a dichotomy with its reverence of the spiritual and martial arts. I do simplify it but, sometimes, take Bushido, the Warriors’ Code, literally and those have become some of my most powerful stories. In A Mother’s Love, Usagi is forced to slay an old woman he befriended because she manipulated him into killing her evil son, then begged him to kill her as well as she could not live with the guilt. Honor dictated that he kill her but he had such an emotional connection to her.

hd: For fans of Usagi Yojimbo, what are some other series—current or classic—that you would suggest to readers?

SS: I enjoy almost anything from Jeff Smith. Geof Darrow’s work is insanely detailed and over the top, especially when it comes to violence. I have worked with Sergio Aragones for about 35 years and regard him as the Maestro. There are so many others—European, Asian, as well as US series.

You were introduced to comics at an early age. What do you think is the easiest or best way to get kids excited about comic books and reading in the age of video games and screens?

SS: Have comics accessible. If kids are into video games, make comics about those games. Right now superheroes are big so there should be inexpensive comics geared for them. You can never get all of them to give up their screens, but you can try to lure some of them away. A lot depends upon their parents. Literacy is dropping quickly in the US.

hd: How have comics changed since you were a kid?

SS: The biggest change for me is technology. It’s changed in every aspect of comic book creation, distribution, and even reading. I still create comics the old-fashioned way with paper, pencil, pens, and inks. Even my lettering is hand done on the original art boards. I love the craft of creating comics. However, so many young creators use the computer. It is not bad, it is just another way of working. You can distribute books yourself through the Internet, nanced by crowdfunding. Readers can access these books the traditional way or read it on a computer. It has changed so much!

hd: What advice would you give to young writers and artists looking to break into comics, or just to make art in general?

SS: Take at least a basic art course. Learn the principles of perspective, composition, using basic shapes. Draw from life. Don’t copy comic books. If you like a particular artist with a unique style, don’t start off copying him. You would be dismissing his years of work to develop that style. In fact, don’t be concerned with style to begin with. It will come
over time. Network—go to conventions, meet other artists, join blog groups with similar interests. Show your work to friends, teachers, work up the chain to professionals, editors, and publishers. Learn to accept feedback and learn from
constructive criticism. If you want to be a good writer, you rst have to be a good reader. Read whatever you can. You never know what will spark a good story.

Graphic novel fans, use these resources to host your own book discussion. Or join one of our branch book discussions. Check our event calendar for times, locations, and titles being discussed.