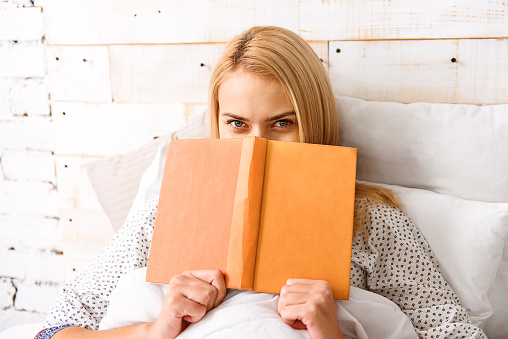 Rate our podcast! Click on that iTunes button and give us stars. All of the stars, please!

The Girl Before by PJ Delaney. A psychological thriller that spins one woman’s seemingly good fortune, and another woman’s mysterious fate, through a kaleidoscope of duplicity, death, and deception. Seizing a unique opportunity to rent a one-of-a-kind house, a damaged young woman falls in love with the enigmatic architect who designed the residence, unaware that she is following in the footsteps of a doomed former tenant.

Final Girls by Riley Sager. Emerging as the lone survivor of a serial killer’s massacre a decade earlier, Quincy Carpenter struggles to ignore traumatic memories and move on as one of a group of other survivors who look to her for answers when one of them is found dead in a suspicious suicide.

Stranger in the House by Shari LaPena. A suspicious accident, a wife who can’t account for herself, and unsettling questions that threaten to tear the couple apart You’re home making dinner for your husband. You expect him any second. The phone rings–it’s the call you hoped you’d never get. You jump in your car and race to a neighborhood you thought you’d never visit. You peer into the dark, deserted building. You brace yourself for the worst. And then, you remember nothing else. They tell your husband you’ve been in an accident. You lost control of your car as you sped through the worst side of town. The police suspect you were up to no good. But your husband refuses to believe it. Your best friendis not so sure. And even you don’t know what to believe.

Last Good Girl by Allison Leotta. Emma, a freshman at a Michigan university, has gone missing. She was last seen leaving a bar near the prestigious and secretive fraternity known on campus as “the rape factory.” The main suspect is Dylan Brooks, the son of one of the most powerful politicians in the state. But so far the only clues are pieced-together surveillance footage of Emma leaving the bar that night…and Dylan running down the street after her. When Anna discovers the video diary Emma kept over her first few months at college, it exposes the history she had with Dylan: she had accused him of rape before disappearing. Emma’s disappearance gets media attention and support from Title IX activists across the country, but Anna’s investigation hits a wall. Now Anna is looking for something, anything she can use to find Emma alive. But without a body or any physical evidence, she’s under threat from people who tell her to think hard before she ruins the name of an “innocent young man.”

Woman in Cabin 10 by Ruth Ware.  Lo Blacklock, a journalist who writes for a travel magazine, has just been given the assignment of a lifetime: a week on a luxury cruise with only a handful of cabins. The sky is clear, the waters calm, and the veneered, select guests jovial as the exclusive cruise ship, the Aurora, begins her voyage in the picturesque North Sea. At first, Lo’s stay is nothing but pleasant: the cabins are plush, the dinner parties are sparkling, and the guests are elegant. But as theweek wears on, frigid winds whip the deck, gray skies fall, and Lo witnesses what she can only describe as a dark and terrifying nightmare: a woman being thrown overboard. The problem? All passengers remain accounted for–and so, the ship sails on as ifnothing has happened, despite Lo’s desperate attempts to convey that something (or someone) has gone terribly, terribly wrong.